'In general we stand on our private little piece of reality looking for the reason that we put ourselves here in the first place.'

I have lost my true origin
When one will relocate its origin
Automatically, one will regain its sensitivity for this perfection
Then every moment has its own inspiration, its own origin
When learned to level one’s self completely to such a moment
one will witness its own true reality
When learned to level one’s self to this reality
one will witness the true nature
When learned to really witness this true nature
one has learned not to witness
one will be one with its surrounding
surrounding and observer are one
both will stop to manifest itself to be all one
both will stop to exist to be all

2013 and 2014 where interesting years for me. Many things changest. For the most my perception. 4 years later, in 2018, a year before I wrote this, I was able to realize that even that, my perception, had no meaning more than being able to clear my mind.

“I need to bring my illusions to the truth instead of giving truth to my illusions.” ― Gary R. Renard, The Disappearance of the Universe: Straight Talk about Illusions, Past Lives, Religion, Sex, Politics, and the Miracles of Forgiveness

When I started this painting, I wasn’t really aware of what it was that I was painting. Of course I knew the form and subjects depicted in the painting, but the reason was not present, yet. it was a couple of years later, while reading the books written by Michael Roads, that I started to have a first clue.
I remember sitting in a car a couple of years earlier,  on the way to a seminar, when I slowly started to drift into my world of contemplation and cutting myself off from the mumbling around me, while gazing at the landscapes sliding away in front of me, a strange notion was emerging in my mind. All this, everything I was seeing, wasn’t real. Everything around me consisted purely because of how I was percepting it. Seeing it was only a visual ability but didn’t make it true. the truth was, as far as I could grasp this at that very moment, that all this was just floating around as loose pieces of matter and was kept together only because I was seeing it this way.
At that moment, I didn’t took this al to serious. I wrote some of it down because the idea interested me. A couple of weeks later I made this painting.
Now, almost 5 years later, I understand that our world, as real as it might seem, is everything but real. That we are basically and inevitably lost. We keep looking for a way out, for answers and for most that one, fulfilling truth that will send us free. But in general we stand on our private little piece of reality looking for the reason that we put ourselves here in the first place.

The Girl who Tells you

The Girl who dit it 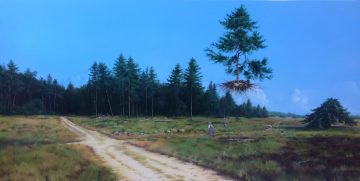 Niets over SHE ART GALLERY missen?

This website uses cookies to improve your experience while you navigate through the website. Out of these, the cookies that are categorized as necessary are stored on your browser as they are essential for the working of basic functionalities of the website. We also use third-party cookies that help us analyze and understand how you use this website. These cookies will be stored in your browser only with your consent. You also have the option to opt-out of these cookies. But opting out of some of these cookies may affect your browsing experience.
Necessary Altijd ingeschakeld
Necessary cookies are absolutely essential for the website to function properly. These cookies ensure basic functionalities and security features of the website, anonymously.
Functional
Functional cookies help to perform certain functionalities like sharing the content of the website on social media platforms, collect feedbacks, and other third-party features.
Performance
Performance cookies are used to understand and analyze the key performance indexes of the website which helps in delivering a better user experience for the visitors.
Analytics
Analytical cookies are used to understand how visitors interact with the website. These cookies help provide information on metrics the number of visitors, bounce rate, traffic source, etc.
Advertisement
Advertisement cookies are used to provide visitors with relevant ads and marketing campaigns. These cookies track visitors across websites and collect information to provide customized ads.
Others
Other uncategorized cookies are those that are being analyzed and have not been classified into a category as yet.
OPSLAAN & ACCEPTEREN